Myself, my husband Paul, and my father-in-law

See the pyramids along the Nile,

Watch the sunrise from a tropic isle

Just remember, darlin’, all the while

You belong to me…

Honey, you don’t have to worry about me. An old lover of mine used to joke “I could spin you around 3 blocks from home and you’d have no idea where you were.” He famously asked a friend of mine when he was driving her home “Do you know where you are?” and she retorted hotly, “Of course, do I look like Nicole?”

I have a very short attention span. I have wandered off from school groups entranced by the animals at Brookfield Zoo, from a group studying the ruins at Pompeii and in a bookstore in Tokyo. You can be sure that I will not be the one to find the lost city of Shangri-La or a rare coral, thirty thousand leagues under the sea. That coral will not be named after me. Someone else will have to find it. I don’t do water. I once waited for my husband for hours on a rock a few feet from shore.

I was the lone white woman going to classes at a school on the far south side the day Martin Luther King was assassinated. In addition, my car was out of gas and I had left my money at home. A cab driver directed me to the gas station and a good-hearted attendant (remember when there were attendants at stations?) put a dollar’s worth of gas in my tank.

I blame it on my left-handedness. I tend to head left no matter what the situation or directions I have been given. If I had been diagnosed with dyslexia– that is, if I had been born now instead of then, I would have had special classes and become an astrophysicist instead of a cartoonist.

If I have been chatting long enough about this propensity to wander off because I’m bored or suddenly want to be alone, it’s because, in truth, I am only occasionally a social animal, and I have remembered a dicey trip I took by myself, where I was given no chance to wander off.

My husband and I decided to divorce, not so easy in 60’s Massachusetts. One had the choice of making up a story of physical abuse or adultery. My husband felt that either testimony would short-circuit his career. I, of course, didn’t care. I was going to be an artist. Nobody cared about my morals.

First, I went to a very cheesy lawyer in town. His waiting room was full of sad looking Mexican men seeking legal help. I was a welcome sight with my long black hair and 21 year-old skin. He asked me to go into some detail about my husband’s deviant sexual practices. I tried and, in fact, I could think of one, but I didn’t think it was really good enough– having to do with high heels, which I think, was probably too common to be grounds for divorce. So I left, feeling abjectly soiled and still in need of a divorce. It was recommended that I get a New York lawyer and fly to Mexico where these things were easier.

I flew to El Paso. I was instructed by my lawyer to wait in my room for a call and then rush down to the lobby. The whole adventure seemed to involve unnecessary rushing. The driver called. He was wearing sunglasses and a camel’s hair coat. He hustled me into a light colored van, where two other Americans were waiting. One was a schlemiel and the other quite an attractive musician, both were whining about their bitchy wives.

We went across the border. I flashed my passport. We raced over to a government building, sped up and down stairs and through atriums where I was sure I would be gunned down. After all, my mother had no idea where I was! At last the three of us (yes, as I recall, it was a group divorce) sat in front of a judge, at a desk, not in a courtroom. 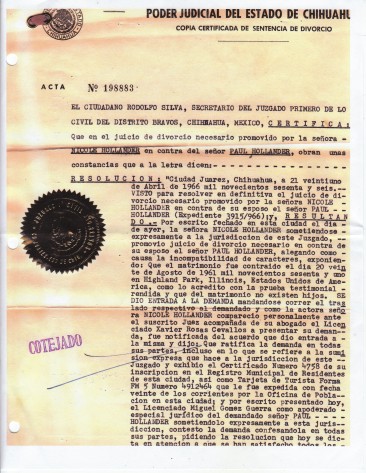 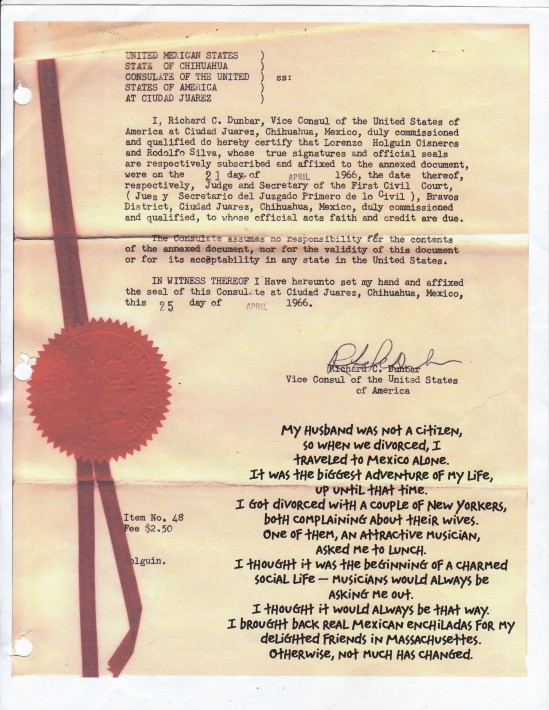 We signed many beautiful pieces of paper  in Spanish and English and they were marked with by the judge with a huge red wax seal.

We were pronounced divorced. The musician asked me to lunch and I felt it was a totally successful trip.  Later, when I read my divorce papers at home, I saw that I wasn’t necessarily a divorced woman. It seemed rather that if I said I was divorced, and my husband said we were, no one would question our status. So far they haven’t.

Nicole Hollander created the cartoon character Sylvia in 1980. The strip was nationally syndicated for over 30 years.  Sylvia, Nicole, and, in fact, all the characters in the strip are blatant feminists and love good food, prepared by others. In 2008 Nicole retired Sylvia and started a 6 day a week blog featuring drawings, opinions, politics and classic Sylvia strips.  She welcomes  contributions by friends and sometimes mere acquaintances. Nicole teaches the graphic memoir, fiction and non-fiction in Chicago and has an introverted cat named Toots.